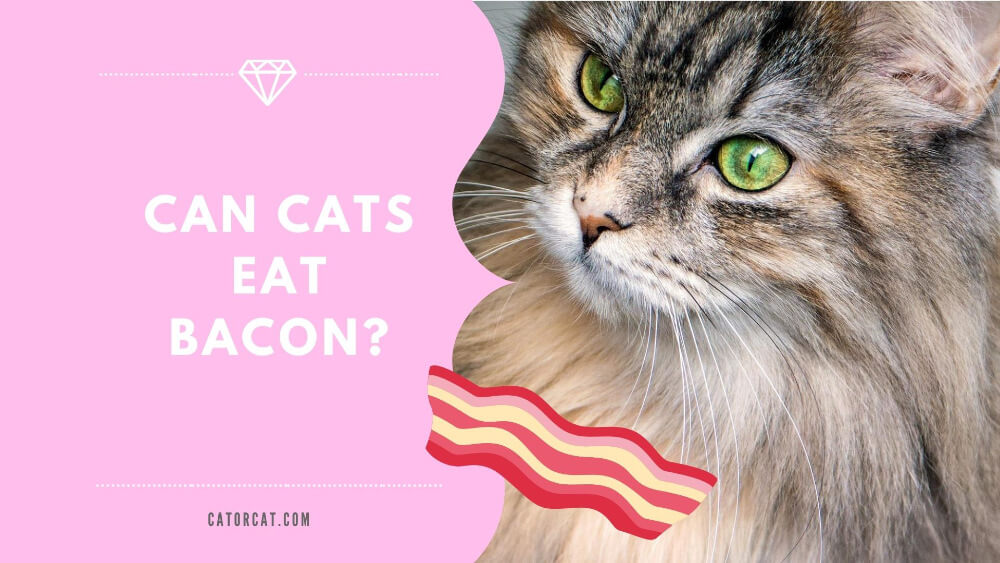 Unless you’re a vegetarian or vegan, chances are, you have bacon at home.  These delicious strips of pork meat taken from the belly of a pig are crunchy and scrumptious, and anyone who eats bacon would definitely have a smile on their face.

But about your cat?  Is it safe for them to eat bacon?  They are obligate carnivores, after all, so why is there a fuss about cats eating bacon?  Should there be a concern?  And what happens if your cat eats too much?

To set the record straight once and for all, let’s find the answer to the question, “Can Cats Eat Bacon?”

Yes, of course, cats can eat bacon, but only as an occasional treat.  The good news is that bacon is not toxic to cats.  So yes, as you munch on your daily bacon treat, you can feed it to your cat every once in awhile, just not everyday, that is.

A small piece of cooked bacon given occasionally will most likely not harm your cat.  As natural meat eaters, cats are drawn to the smell and taste of bacon.

So What’s the Deal?

The concern lies in the fat and salt content of bacon.  Bacon appears to have too much sodium for cats.  If you feed her regular cat food, the salt content in these cat foods are enough for a cat’s daily recommended sodium consumption.

This means that if you feed your cat bacon, that’s already over the recommended daily consumption for felines.

Studies reveal that bacon contains ten times more than the daily sodium intake recommended for cats.  One slice of bacon contains about 137.4mg of sodium.  And any extra sodium is never needed to any cat diet.

Some of the negative effects of long-term overconsumption of sodium include:

What To Do If Your Cat Eats Too Much Bacon

The effects of eating too much bacon is not seen immediately but it manifests in negative long-term effects, such as the conditions mentioned above.

If you prepared several pieces of bacon for the family and your cat accidentally ate too much, then you don’t need to worry.  The worst that could happen is your cat vomiting or feeling nauseated.

Can Your Cat Eat Raw Bacon?

It is highly advisable that you consult your veterinarian first if you’re planning to give your cat raw meats, such as raw bacon.

While you can feed your cat raw bacon, it’s not advisable, since raw meat, eggs, and fish can contain pathogens such as e.Coli and salmonella that could cause diarrhea, nausea, lethargy, and vomiting.  Some pathogens from raw meat can even be fatal for cats.

If you must feed your cat raw bacon, make sure it is fresh and not cured.

What Other Foods are Bad for Cats?

There are certain foods that are bad for cats and should never be given to them at all times. Some of these are milk and other dairy products, as well as chocolate.

Most people think that milk is good for cats as we see lots of pictures with pet kitties drinking milk from a bowl.  What most people don’t know is that most cats are actually lactose intolerant, and consuming dairy products can make them vomit, suffer from stomach upsets, and cause diarrhea.

Cats must never consume chocolate at all times.  This is because chocolate contains two ingredients that are toxic to cats, which are:  caffeine and theobromine.

Important: Just like us, cats needs the right nutrients in the right amount so they can achieve optimal health. Consider vitamins and supplements for cats!

While bacon is safe to feed to your cat, it must be noted that it is only okay if it is given as a treat for cats.  Cat owners need to be wary of the food they feed their feline friends as they are highly sensitive to the food they consume.

Small doses of bacon are fine for cats as long as you don’t feed it to them on a daily basis.  An occasional treat of processed meats can be fine, just make sure they’re not given everyday.