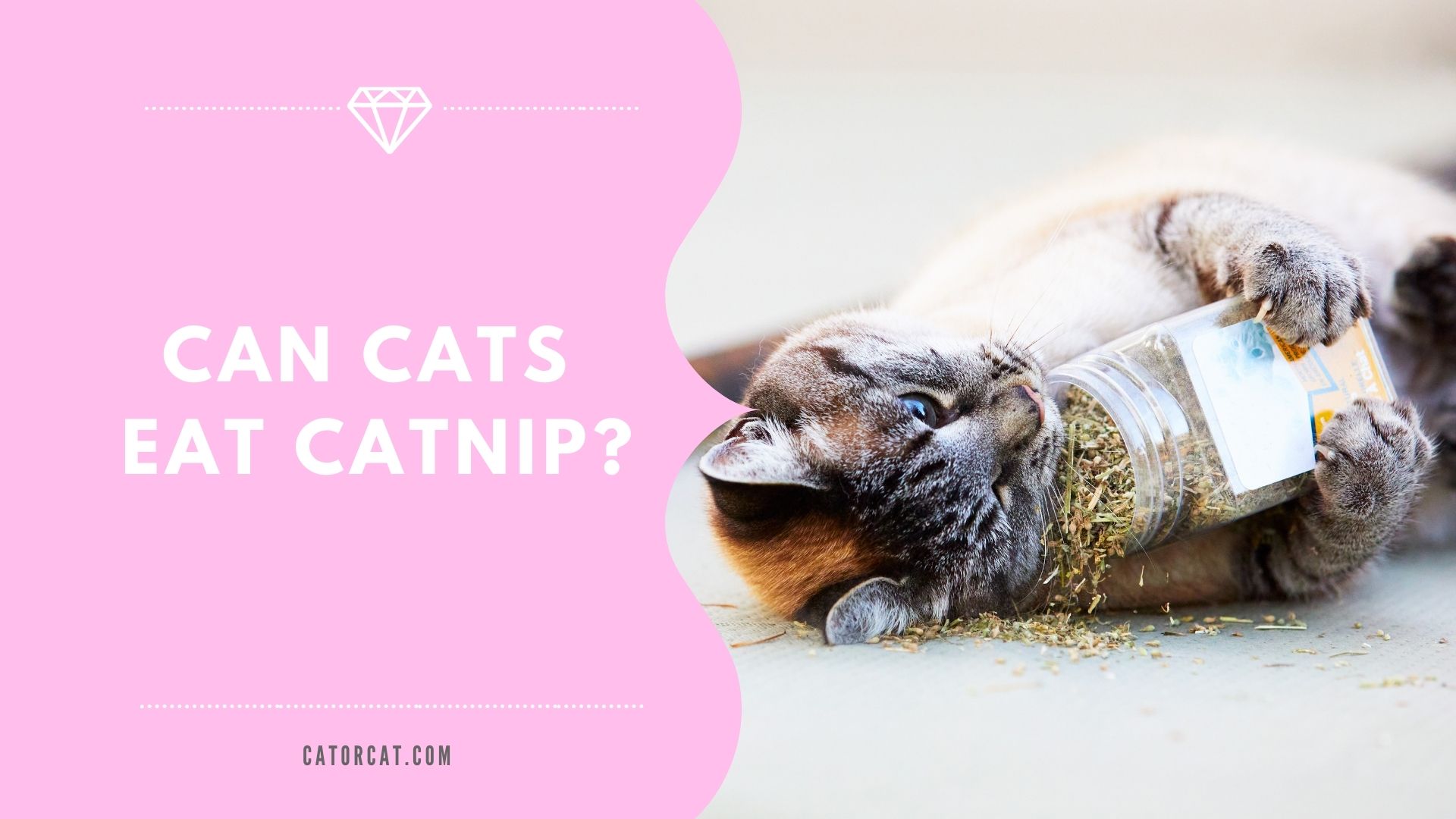 Are you a new cat parent? If you are, then you’re probably wondering about catnip. It’s available in most pet stores and recommended by vets to help ease anxiety and even pain.

But what is catnip, and will your cat need it? And more importantly, is it safe for cats to eat?

In this article, we’ll answer these questions and more.

Catnip is a herb that’s a member of the mint family. The more common name of the herb is Nepeta Cataria, and the word “catnip” is said to originate from the response cats show when snorting or ingesting the plant. The catnip plant quickly grows in North America and naturally grows in the United States.

Catnip produces an oil called nepetalactone that cats react to. Felines have a different scent organ called the vomeronasal gland in the roof of their mouths, responsible for their unusual reaction to the oil.

Yes, cats can eat catnip. It’s completely safe for cats to eat catnip, and overdose is also not a problem. If cats overeat catnip, the typical reaction is a mild stomach upset, diarrhea, or vomiting. Catnip is also non-addictive, so there’s no need to worry about cats overeating.

Catnip will not harm your cat, and it is entirely non-toxic.

There are no nutritional benefits to eating catnip. This means that catnip is simply a means to bring about specific psychological effects in cats.

For most cats, catnip offers a soothing effect. Your cat may feel calm, mellow, and quiet. Others will become more playful, and other cats may become more aggressive. Cats react differently to ingesting catnip, but most of the time, catnip is calming and has often been recommended to ease the symptoms of separation anxiety.

In some instances, catnip can be used to reduce stress and pain in cats who may be suffering from arthritis or an illness.

Additionally, catnip has also been known to mimic the effects of pheromones and can lead to behavior that likens to a cat in heat.

How Long Does Catnip Work?

The effects of catnip will be felt within 10 to 15 minutes of ingestion. Some of the most common behaviors include chewing, sniffing, licking, body rubbing, rolling, stretching, drooling, jumping, or head shaking.

After about 10 to 30 minutes, the effects are likely to wear off, and your cat will not be able to react to the herb within 2 hours if ingested again.

Related: Everything you need to know about cats and weed

How to Give Catnip to Your Cat

There are three forms of catnip that cats can ingest: liquid, dried, and fresh.

Dried catnip is the easiest to give your cat because it’s the most accessible. Dried catnip is available in most pet stores and herb stores. You can feed dried catnip to your cat using your hands or sprinkle it over their food or their toys for them to lick or chew on.

However, the downside to dried catnip is that they’re best used within two months. Just like any other dried herb, they must be consumed as soon as you purchased them as they may not be as effective anymore once that 2-month period has lapsed.

Liquid catnip can be sprayed to your cat’s mouth or sprinkled on your cat’s toys. It can also encourage them to play with new toys, a scratching post, or a new food bowl.

The best way to feed catnip to cats is fresh catnip. You can buy fresh catnip at pet stores or farmer’s markets, or you can also grow the herb at home. Catnip can be grown indoors, and they’re easy to care for. However, it would help if you placed it in a spot where your cat doesn’t have access to it. Otherwise, it might destroy the plant by constantly eating the leaves and flowers or knocking the plant over since it’s highly known that cats love catnip.

Catnip is an excellent herb to give to your cat. It helps them relax, brings them into a mellow and quiet mood, and can even ease separation anxiety and pain.

Though cats generally respond positively to catnip, there are exceptions to the rule. Some cats react violently, while some cats don’t react at all. If your cat became aggressive after eating catnip, it’s safe to say you shouldn’t be giving your cat the herb.

If your cat is hyperactive or suffering from physical pain, giving it catnip can help make it more relaxed and reduce its stress levels.

If you’re planning to adopt a cat or you already have one, and you don’t have catnip at home, it may be time you stock up on the herb or maybe even grow your own plant.